Once you’ve set up a trigger query, you can choose from a variety of trigger actions which Cmd can take when the trigger fires. 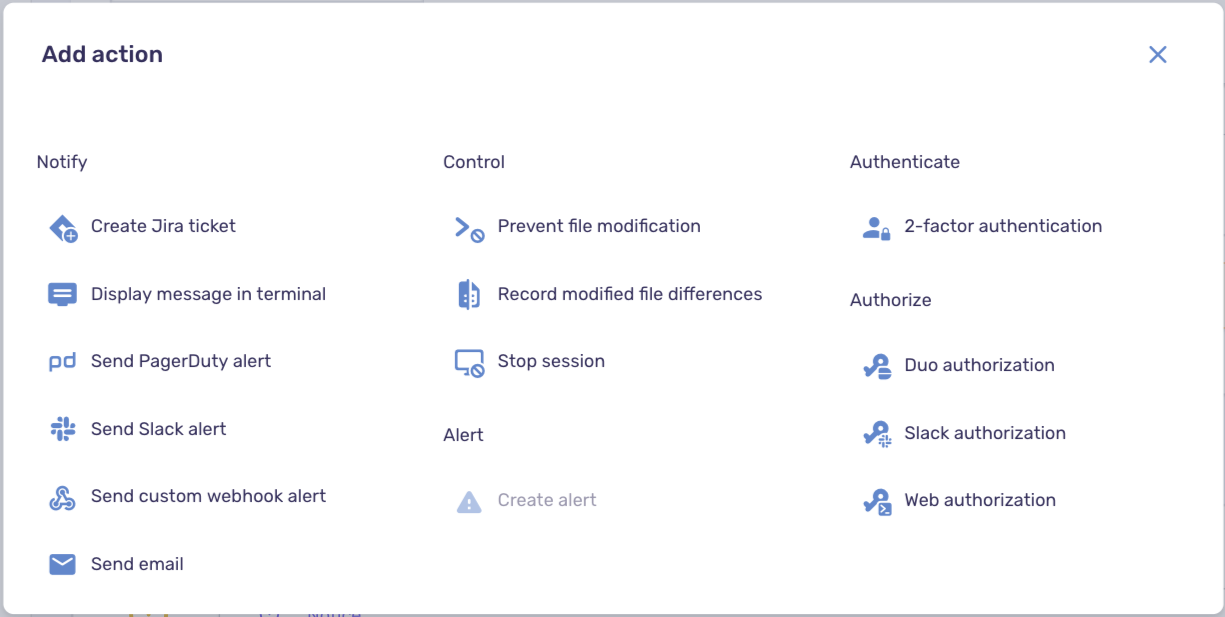 Notification trigger actions send alerts but do not interfere with the server user's ability to perform commands.

Notifications are batched, and sent at one minute intervals. When a trigger configured to notify fires multiple times within a minute, it results in one notification at 6:01 and another at 6:02, each of which summarize the alerts from the last 60 seconds. The exceptions to this rule are notifications sent via custom webhooks, which are not batched.

Create Jira ticket:
Create a new Jira ticket. Select the project that you'd like the new ticket to be created in.

Display message in terminal:
Display a custom message in the terminal session before the command which fired the trigger executes.
Note: This action does not interfere with command execution. To block a command or prompt for additional authentication, add a 'Control', 'Authenticate', or 'Authorize' action.


Send Pagerduty alert:
Send an alert to Pagerduty. Select a Pagerduty integration to use.

Send email:
Send an email notification when the trigger conditions are met. Enter the email address that will receive the notification (recipient email addresses must be associated with Cmd accounts).
Note: For more information, see Reviewing or modifying your email settings.

Block command:
Block the specified command from executing. Afterwards, their session continues. Cmd will not tell the user that their command was stopped.
Note: If you'd like to explain why you blocked this command (which we recommend), add an additional 'Display message in terminal' action.

Do not capture output:
Stop capturing output data for the remainder of the session.

Prevent file modification:
Block commands which attempt to modify the specified file(s). This action can be used to block modifications of specific files or, using wildcards, groups of files.

Stop session:
End the user's session when the specified command is attempted .

Select the maximum number of authentication attempts to allow. Add actions for when a user fails to authenticate (i.e., send a notification, change the alert's risk level, or stop the session).

If the Cmd agent is offline, the default is for the trigger to fail open (meaning the user won't be required to 2FA. If you'd like to perform the fail actions immediately if the agent is offline (fail closed), click Enable offline actions.

Authorize via Duo:
Send a request for an authorized Duo Security user to approve the attempted command.
Note: You can only configure this option if you have set up a Duo integration in the project. For more information, see Managing project-level integrations.

Customize the message that the user sees when prompted to choose someone to authorize them (perhaps explaining why they're being prompted for authorization).

Next, add any actions you'd like Cmd to execute should the user not receive authorization (i.e., sending a notification, escalating the risk level of the trigger, or stopping a command).


Authorize via Slack:
Send a request to a Slack channel to approve the attempted command.
Note: You can only configure this option if you have setup a Slack integration for the project.

Choose a channel where you'd like to receive the authorization requests. Then, write the custom messages that the server operator will see in their terminal before they enter the reason for authorization.

Set the delay before the request times out, and the actions Cmd should take if it does or if authorization is denied.


Authorize via web auth:
Request that the user log into the Cmd web app to self-authorize their command.

Type a custom message to the user (e.g. to explain how to authorize via the Cmd web app).

An overview of triggers