How to limit when triggers fire for authenticated users

This page contains instructions for limiting how often already-authenticated users cause triggers to fire. One important use-case is limiting how often your users must provide additional authentication while accessing your servers. While 2FA is fundamental to good security, even highly-cautious DevSecOps teams may prefer not to continually prompt already-authenticated users for verification. This page focuses on how to limit the number of 2FA prompts, but the same idea works with any kind of trigger.

You can limit the number of 2FA requests by configuring triggers that would ordinarily ask for 2FA not to do so for already-authenticated users.

When users connect to a Cmd-enabled server, they are by default classified as an unauthenticated Linux user. By authenticating with Cmd using 2FA, they assume the roles associated with their Cmd account. You can select which user accounts have which roles, and configure 2FA triggers not to fire for users with certain roles.

The same principle applies to other types of triggers (e.g. you can stop any given trigger from firing for particular authenticated users).

Setting up user roles for your team

First, I created a new user role called “MFAexempt”, and added it to my user account. This caused the role to appear on my Account Info page:

I then created a simple trigger that fires when a user attempts to execute the ‘ls’ command, unless they are an authenticated user with the “MFAexempt” role:

When fired, this trigger displays a terminal message and prompts for 2FA. In the following screenshot, I used the ‘ls’ command twice on a Cmd-enabled server where this trigger was active. The first time, I was prompted for 2FA (because I was not yet authenticated), but I was not prompted the second time, even though I used the same command (because after authenticating, I became associated with the exempt user role): 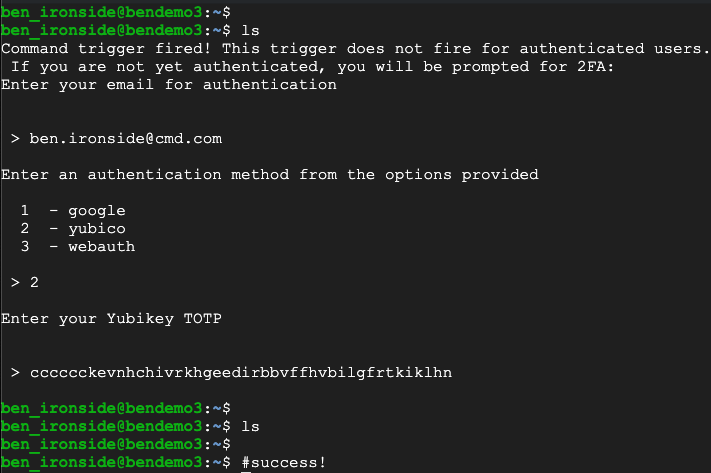